Wednesday, May 27
COVID-19 Update: We are still able to make & ship products. Please feel free to order from our Shop Section
You are at:Home »Movie Reviews »Sonic the Hedgehog Movie Review – Redesign Gamble Pays Off

Sonic the Hedgehog is a 2020 action-adventure family film starring James Marsden and Jim Carrey and also features the voice of Ben Schwartz as the titular character. The movie is an adaption of the video game series of the same name, largely popular in the ’90s on the Sega platforms.

The trailer for the film trended wildly in 2019 on two separate occasions, both due to the CGI design of Sonic himself. The first design was widely bemoaned as being too realistic and earthy. Fans complained that the look was too much of a departure from his look in the video game. The production team acknowledged the audience feedback and went back to the drawing board. The film made waves once again, this time for the right reasons, when the trailer was re-released with the redesigned Sonic.  Fans applauded both the look of the redrawn character, a return to the likeness of the video game, and the fact that the studio actually heeded the advice of fans. In our opinion, spending the extra time and funds to revamp the beloved blue hedgehog was a gamble that paid off. 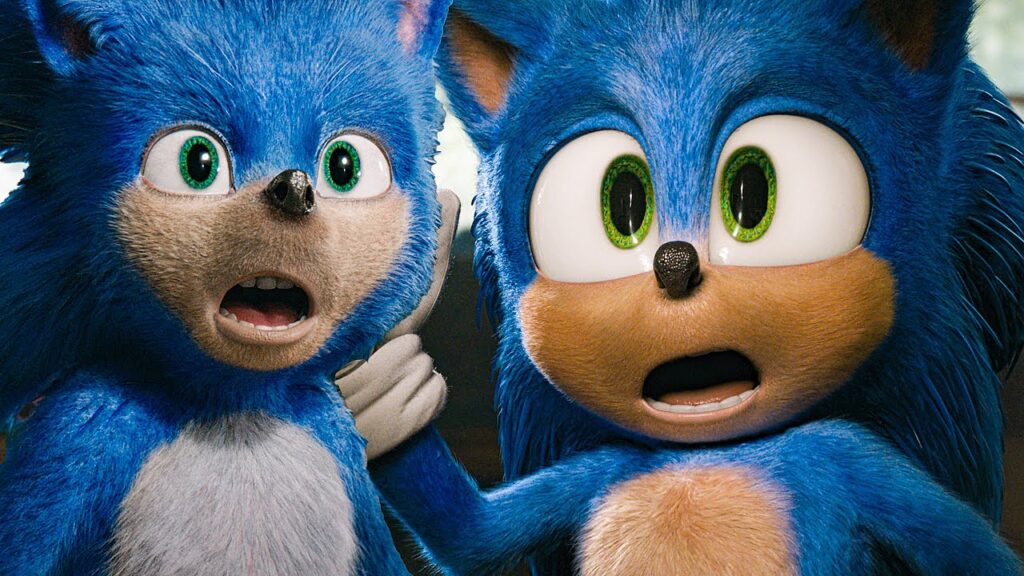 The film starts with a quick background of Sonic’s upbringing on his home planet. At a young age, he’s forced to escape to Earth, specifically Green Hills, Montana, via portals opened up by golden rings. We catch up to Sonic 10 years later, where he’s enjoying high-speed life in his small town. Hiding from society, the only void in his life is a lack of friendship. He regularly spies on local police officer Tom (James Marsden) and his wife Maddie (Tika Sumpter), wishing to someday meet them face-to-face and become true friends. 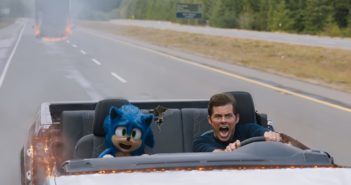 When Sonic accidentally causes a nation-wide power outage, the federal government takes notice and decides the only person who can find the cause is mad scientist Dr. Robotnik (Jim Carrey). Meanwhile, Tom and Sonic have an accidental encounter where Sonic ends up opening a portal to San Francisco and drops the rest of his valuable golden rings through the gateway without making it through himself. Dr. Robotnik shows up a short time later to Tom’s house, hot on the trail of Sonic. Realizing Robotnik’s intention to capture Sonic and use his body for unwieldy power, Tom and Sonic escape and hit the road for San Francisco, with the intention of retrieving the rings that present Sonic’s only passage to safer worlds.

Sonic the Hedgehog is a rare occasion where a production nightmare resulted in both a quality, cohesive film from a critical standpoint and a box office success story.

With its PG rating, we get a family oriented adventure that’s easy to follow and doesn’t distract with any secondary plot lines or unnecessary messaging. There are no useless characters or seemingly forced romances. There aren’t any over-complicated twists, turns, or deceptions. It’s a simple film about feeling out of place, making real friends, and defeating evil. The themes are easy to interpret even for the 5-8 year old demographic.

The humor in Sonic the Hedgehog is elementary but well delivered. It does frequently go after low-hanging fruit, but even if you didn’t chuckle at a particular joke, you get the feeling that it got a laugh out of some age group somewhere, whether it be younger children, tweens, or teens.  Marsden does a great job of playing a stable presence that the rambunctious Sonic and maniacal Robotnik can bounce off of. The humor flows consistently with the action.

Jim Carrey plays a Dr. Robotnik that has a lust for technology, a disgust for humans, and a domineering eccentricity. It’s a solid performance that does exactly what it’s asked. While adults might not be particularly moved by Robotnik’s blend of quirkiness and sinister tendencies, you still get the feeling that Carrey is playing an effective baddie for the kiddos.

What makes Sonic particularly effectual for millennials and younger Gen-X’ers is the fact that it leans heavily into its source material. It embraces everything about Sonic, from his energy to his youthful spirit to his running shoes. It doesn’t try to throw nostalgia at you unnecessarily; it just acts like itself. It also doesn’t waste a lot of time explaining the origin of Sonic’s powers or how he got his name or who his parents were. Fans want to see Sonic have fun, go fast, and give Robotnik a proper beatdown. And that’s what we get here.

Overall, Sonic the Hedgehog is an enjoyable film for kids, adults, or most compellingly the family as a whole. It’s a simple, well-paced adventure that doubles as a buddy/road comedy. Rather than exploiting or ignoring its source material, Sonic celebrates it. And in terms of just the aesthetics, the studio made a great choice to redesign Sonic to more closely resemble the creature that fans know and love. It’s the kind of move you enjoy seeing pay off and in this case, it certainly did.

Sonic the Hedgehog is a fast but evenly paced buddy comedy that embraces its video game source material in a way that will please fans of all ages.