Dennis Busenitz
“Its Physical and mental, you have something to focus on.”

Lil Wayne
“One thing about a skater, they never quit, so a skater to sum it up is awesome.”

Tony Hawk
“I consider skateboarding an art form, a lifestyle and a sport. ‘Action sport’ would be the least offensive categorization.”

Marc Johnson
“All skateboarding is, is putting ideas into action.”

Lucas Klein (everskate.com founder)
“Over the years, I’ve heard a lot of people say “there’s something missing in my life”.  None of these people have been skateboarders.”

Ryan Sheckler
“For me skateboarding is a lifestyle, I dont really know anything different, my life revolves around skating, if I wasn’t a pro skater, I’d still be skating everyday.”

More great skate quotes below, but first… Let us make you something!

Lance Mountain
“I feel like I’ve influnced in the sense that if you want to do it, do it.  If you don’t want to do it, don’t do it.  But don’t rely on what people are saying you can do or saying what you can’t do.”

Sean Malto
“It’s better to go out like a man, trying, than to play it safe and get second.”

Jerry Seinfeld (talking to Chris Rock)
“I’ll tell you one of the great activities is skateboarding.  To learn to do a skateboard trick, how many times do you gotta get something wrong til you get it right? …And you hurt yourself, and you learn to do that trick, now you got a life lesson.  Every time I see those skateboard kids, I think ‘those kids’ll be alright.’ ”

Bam Margera
“Skateboarding teaches you how to take a fall properly. If you try to kickflip down some stairs, it might take you thirty tries – and you just learn how to take a tumble out of it without getting hurt.”

Travis Barker
“All I wanted to do was ride skateboards – I wanted to be a professional skateboarder.  But I had this problem. I kept breaking half of my body skateboarding.”

Mark Hoppus
“The last few years I became a lot more into sports.  Growing up, the sports I liked were independent sports, like skateboarding.  I was really into skateboarding, and not necessarily team televised sports.”

Ryan Sheckler
“Hopefully, kids realize you can do anything you want. Skateboarding can be that gateway.”

Jason Lee
“Growing up in Huntington Beach, you were either a traditional sports athlete, a skateboarder, or a surfer.  I got my first skateboard when I was five and skated off and on over the years, did a little BMX racing as a kid, and then in my freshman or sophomore year I started getting a little bit more into skateboarding.”

Rodney Mullen
“Do what you love and try not to look at what other people occupy themselves with. Most people seem restless and bounce around too much to focus or even pay attention enough to themselves to figure out exactly what they really do love, as opposed to what the people that surround them are doing.”

Ryan Sheckler
“My life path has been a blessing and a great learning experience. Skateboarding is my passion and I don’t see that changing. When I’m not skating, I love to surf. I’m open to the new experiences and opportunities.”

Tony Hawk
“I won’t quit skating until I am physically unable.”

We hope these inspired you… NOW GO SKATE! 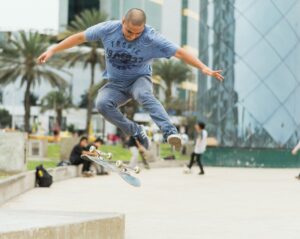