Skateboard ramps come in all shapes and sizes. For example, some kicker and launch ramps and small enough to fit into the trunk of a car while most half pipes require vast open spaces and are not easily transported. If you are new to skating, the following tips will guide on the types of skate ramps and the decision of whether to purchase or build them yourself. 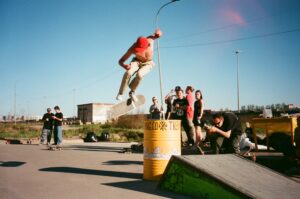 One of the most basic types of skateboard ramps are kickers. They essentially consist of a bank or slope at a straight angle.  Relative to the ground, a kicker ramp’s surface is typically banked at about 15-30 degrees. There is no curvature to the slope.  Portable kicker ramps are usually around 2-3 feet long and made from wood, plastic or some other composite materials.  Concrete kicker ramps are a common feature at skateparks and are often connected or close to a nearby rail or ledge.

Launch Ramps
Similar to kickers, a launch ramp can be both a movable element and also an attached feature of a skatepark.  What makes a launch ramp different is that its slope has a degree of curvature. Like the name implies, it’s meant to launch you a bit higher than a kicker ramp would.  A launch ramp can have various “exit angles” though they are usually going to be 60 degrees or less.  Amplitude is the goal of a launch ramp.

Quarter Pipes
Once you’ve gotten some experience skateboarding and are comfortable with the smaller types of ramps, a quarter pipe would be the next thing you might want to approach.  Quarter pipes are very often seen at all types of skateparks. They once again can be made of most materials.  Quarter pipes, by definition, approach a 90 degree angle (and sometimes meet it). In other words, by the time you reach the top of the ramp, the nose of your board will be close to pointing straight up.  The purpose of a quarter pipe is to do a trick at the top of the ramp, either on the coping or in the air, and then come back down. 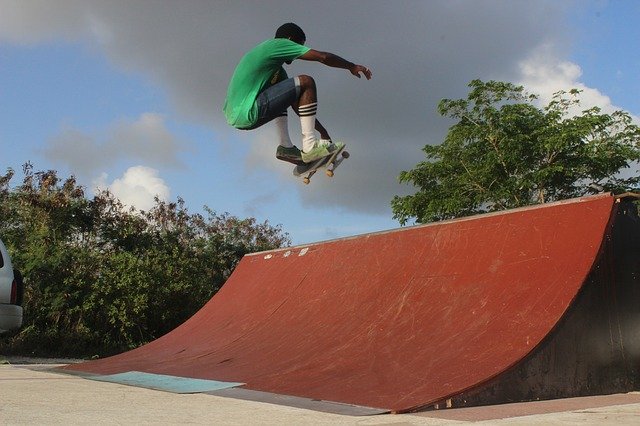 A quarter pipe can literally be almost any size. You can buy quarter pipes for your home that are a couple feet high and 4 to 8 feet wide. You can go to many skateparks and find quarter pipes that are much higher than this. Mega ramps, often seen at the X-Games, feature a quarter pipe that is 20-30 feet high.

Launch Ramp / Quarter Pipe Combos
Some ramps have just the right pitch to where you can launch out or choose to roll back in. You’ll often see at skateparks some sort of banked concrete ramp that functions as both a launch ramp and a quarter pipe. Some might call these a “hip” or “bank.”  There are ramps from several suppliers that you can purchase which can be used in either way.

More about skate ramps below, but first… Let us make you something!

Half Pipes
Half pipes or “vert ramps” are seldom seen at public skateparks, but an entire sect of skateboarding revolves around vert skating. Many top-tier pro skaters have shaped their career around the halfpipe, most notable Tony Hawk.  A half pipe consists of two “walls” and a flat bottom.  The walls of a half pipe always reach 90 degrees or “vertical.”  Half pipes can be anywhere from about 7 feet to 14 feet high, though most are in the 10-12 foot range.  They are usually made from wood, though some concrete versions can be seen at larger skateparks. There is always metal coping that runs along the length of a half pipe. 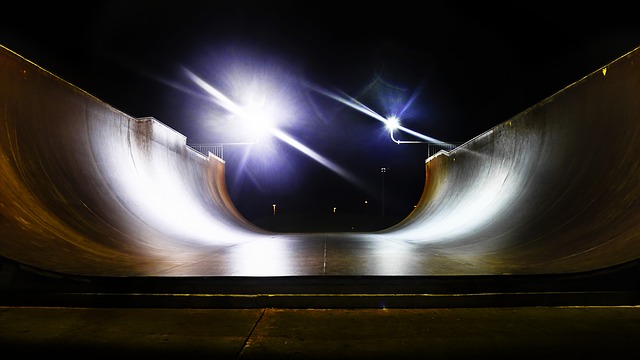 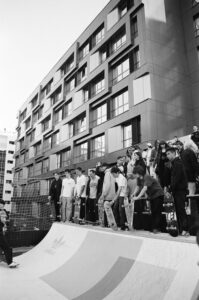 Like half pipes, mini ramps feature two walls of transitions and a flat bottom. A mini ramp is essentially a small version of a half pipe. They are usually between 8 feet and 16 feet wide. A mini ramp’s height can be anywhere between 2 feet and 6 or 7 feet. Wooden mini ramps are a common feature at indoor skateparks, but concrete versions are also often found at outdoor skateparks.

Pyramids or kicker-to-kicker
There are many combinations ramps that involve two or more banked ramps at different angles. These commonly include pyramid-shaped ramps.

Boxes, Rails, Ledges, and more
There are many other types of obstacles that can be grouped into the skate ramp family. These include the following:
Box – A rectangular wood or concrete element that is usually 2-3 feet wide, 1-2 feet high and 3-6 feet long. A box or “fun box” almost always has coping on the long sides for grinds and slides. The flat top is often used for manual tricks.
Flat rail – A straight round or rectangular metal rail for grinding and sliding.
Ledge – Similar to a box but may be only one-sided or without a wide top surface
Slant or handrail – A rail at an angle, often down a bank or set of stairs. This is often meant to replicate the handrails you see in street skating.
Kink Rail – A rail that banks part way through. Sliding or grinding “through the kink” can often be challenging.
Curved or Rainbow Rail – A rail that has a vertical or horizontal curve or arch.

Mega Ramps
Most casual skate fans know the term “mega ramp” from the X-Games, though there are a few other places they can be found. Camp Woodward, an action sports training facility, has a mega ramp at one of its locations. Legendary vert skater Bob Burnquist also has a mega ramp in his backyard.

Vert pro Mitchie Brusco lands the first 1260 degree rotation on a Mega Ramp during X-Games in 2019:

A mega ramp consists of a sloped roll-in, around 4-6 stories high, which leads to a giant launch ramp. The launch ramp is used to clear a gap of anywhere between 20 and 70 feet.  After you clear the gap, you approach a huge quarter pipe that is 18 feet or higher. “Skating mega” is a daunting task and rarely done by skaters who aren’t already professionals. Skaters often wear extra pads when skating this massive ramp.

Where to Buy Skate Ramps
Many of the above mentioned types of ramps and rails can be bought for home use. Some of these elements require assembly while others arrive at your doorstep ready to use.

Some skate ramp companies that ship nationally include OC Ramps, Ramptech, and FreshPark.
There are many ramp builders that are more localized. If you do a Google search for skate ramp companies nearby, you might be able to find a company that will come out and build a ramp for you. These companies occasionally also advertise on Craigslist.

How to Build
An alternative to buying a skate ramp is to build your own. Making a more elaborate ramp will take some expertise in woodworking. If you are building by yourself and not particularly experienced, you may want to start off with something more simple like a kicker ramp or flat rail.

You can find all sorts of ramp plans on various websites as well as on YouTube. Building a skate ramp can often be a fun father-son project or something you can work on with your friends, siblings, or skate crew.

Conclusion
What makes skateboarding great is the versatility of where you can actually skate. You aren’t confined by a field or court or boundaries. Skateboard ramps can come in all shapes and sizes. You can combine ramps and rails, boxes and ledges. There are no rules and no limits. We hope this guide gave you some insight on skate ramps. Now it’s your turn to get creative and see what you can do. GO SKATE!