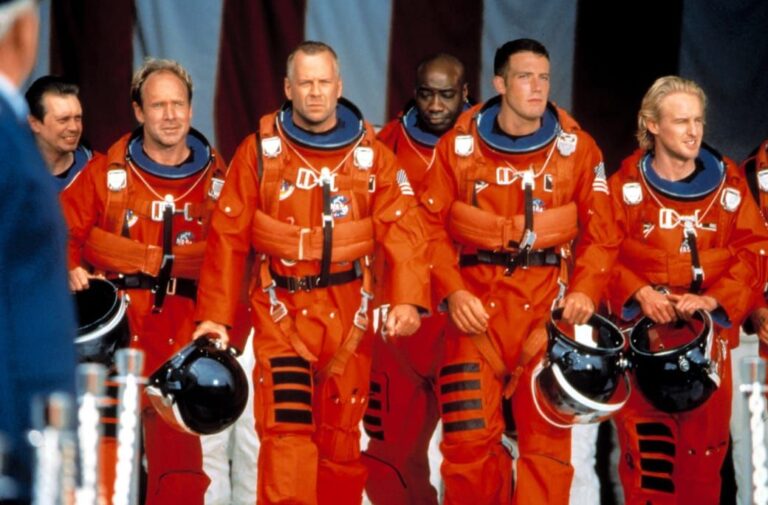 It’s been about 22 years since Armageddon hit the big screen. The 1998 blockbuster action-adventure disaster movie features an all star cast, large budget special effects, and a soundtrack that has both pop recordings and a classical score. Armageddon was a box office hit and we’re here to argue why it’s still one of the greatest entries in the disaster film genre.  Warning: The following contains many spoilers.

An All-Star cast that you love and can relate to
One of Armageddon‘s greatest strengths is the caliber of its ensemble cast, which included Bruce Willis, Ben Affleck, Billy Bob Thornton, and Liv Tyler in its lead roles. Support included talented and experienced professionals like Will Patton, Steve Buscemi, Owen Wilson, William Fichtner, and the late Michael Clarke Duncan.

Humor that holds up
A weakness found in many modern day action, adventure, and comedy films are external references that only work in the time period they take place in.

Armageddon succeeds in its humor because most of the jokes are either self-contained,  or refer to something eternal or timeless.

In one exchange, Harry is describing the requests of his crew to Truman (Thornton). The final demand is one we can all get behind: “Yeah one more thing, um… none of them wanna pay taxes again. [pauses] Ever.”

In another scene, AJ (Affleck) contemplates a daredevil over a canyon on the asteroid they’re traversing and makes a comment to Lev (Peter Stormare), a cosmonaut who has little understanding of pop culture.

“A.J.: Have you ever heard of Evel Knievel?
Lev Andropov: No, I never saw Star Wars.”

A story that’s both American and Human
Nothing screams U.S.A. more than NASA recruiting a ragtag  team of deep core oil drillers to ride on shuttles titled Freedom and Independence.  The film is profoundly American in its attitude and spirit.

The President in Armageddon takes a relatively backseat role in comparison to other disaster movies of the 1990s like Deep Impact, Air Force One, or Independence Day. However, there’s an incredibly well written speech that he gives as Harry, AJ and their crew board their ships en route to some asteroid ass-kicking.

“I address you tonight not as the President of the United States, not as the leader of a country, but as a citizen of humanity. We are faced with the very gravest of challenges. The Bible calls this day “Armageddon” – the end of all things. And yet, for the first time in the history of the planet, a species has the technology to prevent its own extinction. All of you praying with us need to know that everything that can be done to prevent this disaster is being called into service. The human thirst for excellence, knowledge; every step up the ladder of science; every adventurous reach into space; all of our combined modern technologies and imaginations; even the wars that we’ve fought have provided us the tools to wage this terrible battle. Through all of the chaos that is our history; through all of the wrongs and the discord; through all of the pain and suffering; through all of our times, there is one thing that has nourished our souls, and elevated our species above its origins, and that is our courage. The dreams of an entire planet are focused tonight on those fourteen brave souls traveling into the heavens. And may we all, citizens the world over, see these events through. God speed, and good luck to you.”

The speech has gotten overlooked as far as movie lore goes, namely because the President himself is rarely shown onscreen and the focus is given to the main stars.

Throughout Armageddon, there are many scenes depicting both devastation and triumph in other countries around the globe, reminding us that we are all in this together. We touch on this a bit more in the next section.

A reminder of the stakes
What are we fighting for?  What are the consequences if we fail?  These are important questions that must be answered in order to be successful for any movie that falls into the disaster, action, or superhero genre. Films even with the biggest of budgets fail at this, including Justice League, Birds of Prey, and Terminator: Dark Fate.

Armageddon does an excellent job of showing us exactly what’s at stake. At its onset, we see a massive meteor shower causing damage and casualties all over New York City.  A short time after we meet our heroes, we see much of Shanghai get destroyed by debris preceding the main event asteroid.  Further along, we see yet another meteorite take out Paris, France.  In other words, we are constantly reminded throughout the film that mission failure means global catastrophe.

On their way to the asteroid, the lovable team of misfits is constantly bombarded with calamity. Also adding to the weight is the romantic relationship between Grace (Tyler) and AJ and the familial dynamic between Grace and Harry. The stakes are ultimately very high. We know the planet is in jeopardy and the characters we care about are at risk.

The effects still look and sound good
Armageddon debuted in 1998 when CGI was still in a relative infancy. The film uses both computer generated and practical effects, and knows when to use each one. If you’re giving this a watch in 2020, you won’t be distracted by any dated animations or action scenes that now seem hokey.

Best Visual Effects was among the four Academy Awards for which it was nominated.  Oscar noms for Armageddon also included Best Sound and Best Sound Effects Editing.

The audio and visuals in the shuttle crash scene below do a perfect job at depicting the asteroid’s treacherous and horrific environment. Establishing this terrifying setting is incredibly important, as it allows for the intensity to be maintained for the remainder of the mission. You can’t have an “edge-of-your-seat” thrill ride of a movie without creating any sense of danger.

A timeless soundtrack
Highlights from Armageddon: The Album include Aerosmith’s “I Don’t Want to Miss a Thing” and Chantal Kreviazuk’s cover of “Leaving on a Jet Plane.” The soundtrack also included hits from ZZ Top, Journey and Bob Seger.

The album was very successful commercially and “I Don’t Want to Miss a Thing” become one of Aerosmith’s greatest hits. It received an Oscar nomination for Best Original Song.

What often gets overlooked is it’s dramatic and majestic score.  Composed by Trevor Rabin, the theme invokes a wide range of emotions from wonder to danger to triumph.

Delivers on edge-of-your-seat thrills
Armageddon is perpetually compared to Deep Impact, due to the fact that their release dates and plot are similar. However, only the former should be considered among quintessential 1990s disaster movies. While Deep Impact is an enjoyable film and has its moments and has a heart, it lacks the action and intensity that Armageddon embodies. I’ve always considered Deep Impact to be more of a disaster drama than a disaster thriller.

Armageddon features endless harrowing moments, including space station explosions, thrusting around the moon, asteroid canyon jumps and bomb clock countdowns. And none of it feels empty or meaningless. The film slows down enough to let us know the characters, the relationships, and the stakes. 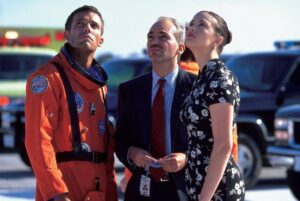 The film is particularly effective in its last 15 minutes, providing numerous payoff moments that were well built up throughout the runtime. The following actions make for a meaningful and emotional finish to the arduous journey that our likable cast has embarked upon.

1) Harry’s sacrifice for A.J. – This completes the arc of their relationship. Harry has gone from shooting a gun at A.J. in their opening scene to taking his place as the one who must stay behind and manually detonate the nuke.

2) Colonel Sharp’s Trust in Harry  – Two different leadership styles were represented between Harry Stamper and William Sharp. Through the story, we see Sharp go from being skeptical of Harry and his ragtag team to having complete faith in his will and determination. As they’re departing the asteroid, Sharp expresses a desire to go back and finish the job themselves, but ultimately heeds Chick’s words that Harry will come through. In the final moments, Sharp requests a handshake from Grace, the “daughter of the bravest man I’ve ever met.”

3) Mission patch for Truman  – Midway through the film, Truman expresses resentment over never getting the chance to be an actual astronaut. While forcefully making the sacrifice for A.J., Harry rips off his own patch and instructs A.J. to give it to Truman, which he does shortly after the crew returns home.

4) Chick’s family – At some point shortly after his son’s birth, Chick and his wife separated for undisclosed reasons, but likely due to Chick’s gambling habits or similar vices. Both she and their son are present at when Chick makes it back safely, indicating that Chick has redeemed himself and that there is possibility for reconciliation.

5) A.J. and Grace – Harry was questioning of the relationship from the onset, but slowly finds throughout the film that A.J. was a worthy suitor. He realizes that A.J. is not just a roughneck looking for a hookup, but that he’s delicate and caring.  As Harry commits to staying behind on the asteroid, he tells A.J. to take care of his daughter. The two embrace on the tarmac and are seen getting married as the credits roll.

6) Rockhound and Molly Mouse – In Armageddon, even the comic relief has a payoff moment, as the stripper hops out of a van upon seeing Rockhound return and the two fall to the ground kissing.

7) Global celebration – We once again see the reactions of people around the world, this time as they see the asteroid explode into pieces.

Conclusions
The 90s gave us countless disaster movies featuring every sort of catastrophe from tornadoes (Twister) to aliens (Independence Day) to volcanoes (Volcano and Dante’s Peak).  Among those dealing with celestial rocks, Armageddon easily defeats Deep Impact. And generally speaking, Armageddon may be the best altogether.

It features meaningful and relatable characters, complete with their own vices and regrets. The cast is one of the best that an action-adventure movie has seen. There are arcs for both the characters and their relationships. The special effects and humor hold up well. The soundtrack is nearly perfect, featuring an underrated score, classic Americana rock, and new hits. The film is well-paced. It’s constantly fun but also constantly reminds us of the stakes, both personal and global. There is great action and some of the best payoff scenes that cinema has to offer.

Armageddon is the penultimate summer box-office thrill ride, and decades later, few films have come close to matching its impact.