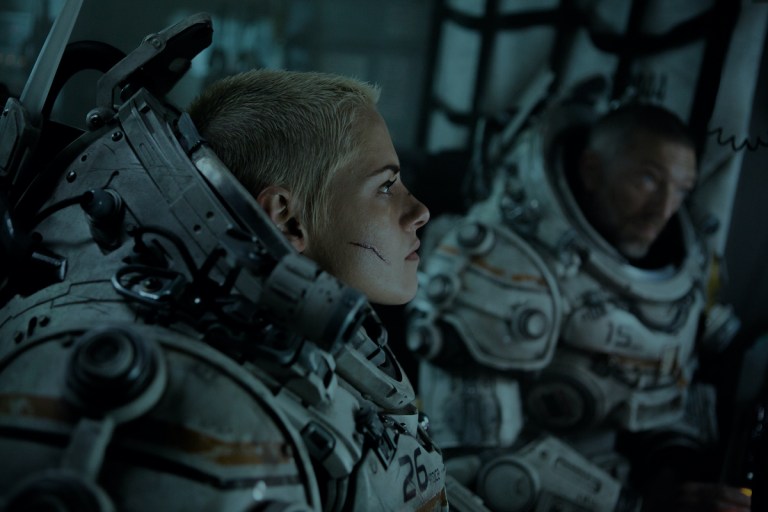 Underwater is a science fiction horror thriller directed by William Eubank and starring Kristen Stewart. It also features Vincent Cassel, T.J. Miller, Jessica Henwick and Mamoudou Athie. Though production began in 2017, the film was not released until January of 2020. It was considered a box-office bomb, grossing about $41 million globally against a budget $10-40 million higher. Though it flew well under the radar, we think Underwater presented a satisfactory deep sea sci-fi horror/thriller that fans of the genre can get behind.

The action gets underway, and underwater, very quickly. An opening montage sets the scene for audiences. We’re in the Mariana Trench, the deepest ocean trench on the planet, 7 miles below the surface. Tian Industries operates several stations for both drilling and research purposes. We’re introduced to mechanical engineer Norah Price (Kristen Stewart) brushing her teeth and narrating for us what the human mind goes through when you’re 35,000 miles down. She describes at as difficult to differentiate between day and night, reality and dreaming.

What appears to be a strong earthquake rocks the enormous facility, causing massive amounts of damage and flooding. En route to finding a way out, Norah comes across colleagues Paul (T.J. Miller), Rodrigo (Mamoudou Athie), Captain Lucien (Vincent Cassel), and the romantically involved Emily (Jessica Henwick) and Liam (John Gallagher, Jr.). The group realizes that all the nearby escape pods have already been deployed and must set out on a journey through the interior passages of the stations’ remnants and across the bottom of the ocean floor itself. It’s not long before they discover that in the dark, quiet depths of the sea, they are not on their own.

Underwater is the type of film that you might have low expectations for, but that ends up doing a lot of things right.

When you think of a modern horror that takes place miles below the surface of the ocean, you might expect some of the following production elements: visual darkness, shaky cam, a reliance on CGI, and moments of not knowing exactly what’s going on. Audiences tolerate these to varying degrees, but if you’re turning on a 90-minute sci-fi horror called Underwater, you know plain and simple that you’ll be getting a lot of that. Where entries in this genre pass or fail mostly lies in the characters, performances, story, and in-between scenes.

Kristen Stewart gives a strong performance as a quick-thinking, fast-acting, selfless leader who is able to defer to others when it’s called for. We’re given a good amount of time with her alone as well as with her crew, allowing us to effectively be in her shoes, or in this case, a heavy duty suit meant to withstand literal tons of pressure per square inch.

T.J. Miller is of course assigned comic relief duties, which are only occasionally good for a laugh. However, many of his lines coincide exactly with what you might be thinking at home as you watch the team discover the existence of spine-chilling creatures that don’t seem to like them very much. You appreciate him much more in this function as a metaphorical member of the audience. After all, for this kind of film to be entertaining, it’s important that it doesn’t take itself too seriously.

The rest of the cast is perfectly adequate as friendly colleagues trying to stay alive with no ulterior motive. The absence of a human antagonist was the right move in this case. The monstrous critters lurking in the trenches and the sea itself are big enough threats.

The production value of both the exterior and interior of the drilling stations is a feast for the eyes. The designs of the half-alien half-mythological looking ocean beasts isn’t too shabby either. The bulky aquatic suits are reminiscent of the Starcraft video game and seem to be aesthetically appropriate for the mission embarked upon. The original score by Marco Beltrami feels a bit minimalist, but is otherwise effective in retaining tension throughout.

Runtime for Underwater is a brisk 95 minutes. There is no B plot or side stories to distract you. There aren’t characters requiring any significant arcs. We don’t know why these individuals chose to work in this seemingly nightmare of a setting. There is no time for any of that. We do get some occasional political messaging about how they should never have been drilling down there to begin with, but it’s taken mostly in stride. 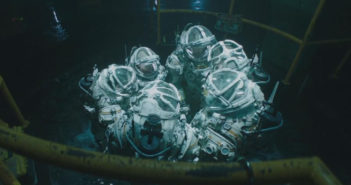 The weakest spots tend to occur when the group is trudging along the seafloor. There are several scenes that feel like a found-footage film, shakiness and quick cuts abound, and it is often too dark to understand where all the characters are. Also, it’s best not to think too hard about the technology seen in the film. Luckily, it is not leaned upon too heavily, and since this is more horror than it is sci-fi, it’s not worth nitpicking.

The fact of the matter is that Underwater is very aware of what kind of film it is and knows what the audience came to see. There are moments when a greater ambition shines, but the production is a bit held back by its own setting, budget, and runtime. Nevertheless, the end result is a flawed but satisfying, entertaining, and sometimes horrifying science fiction thriller that rivals other entries in its genre.

Underwater is an enjoyable deep sea thriller ride with Kristen Stewart at the helm. Though it suffers from some moments that are too dark to tell what's happening, what you are able to see will usually leave you impressed or horrified.