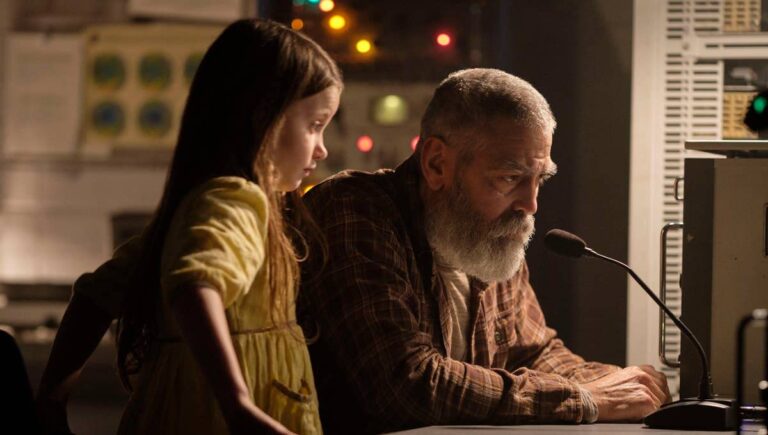 The latest science fiction film from Netflix, The Midnight Sky, made its debut on one of the most cheerful nights, Christmas Eve, during one of the most cheer-less years, 2020. The film features George Clooney, Felicity Jones, Kyle Chandler and David Oyelowo, and was adapted from the novel Good Morning, Midnight by Lily Brooks-Dalton. All timing circumstances considered, The Midnight Sky landed with a thud of ambivalence.

The film, taking place in the not so distance future, follows terminally-ill Augustine Lofthouse (Clooney) in a quest through the only habitable region left on Earth, the Arctic. Augustine’s mission is to get a communication across to the Aether, a space craft returning to Earth after an exploratory mission to one of the moons of Jupiter. His message: Do Not Come Back to Earth.

Accompanying Augustine is Iris, a young girl who does not speak, who had mysteriously shown up at the base station shortly before his trek. As their journey together progresses, we periodically check in with the crew of the Aether, which includes Jones, Chandler, and Oyelowo, amongst a couple others. We also occasionally revisit the past in the form of flashbacks, which show young Augustine in the prime of his career and meeting love interest Jean Sullivan (played by Sophie Rundle).

There are strong performances throughout The Midnight Sky. It seems like it’s been a quick minute since we’ve last seen George Clooney in a meaningful role. As Augustine Lofthouse, he reminds you that he’s capable of playing more than just a charming smooth-talker with easily redeemable flaws. Felicity Jones, Kyle Chandler, and David Oyelowo are just fine as a cautious crew on board the stunning Aether.

There are a few visuals here that are indeed striking. The Midnight Sky gives you a beautiful glimpse of Jupiter from the surface of K-23, one of the planet’s moons thought to be suitable for human life and expansion. The depiction of the Arctic is appropriately desolate, giving feeble Augustine and his young, mute companion little reprieve from the elements.

Where the film loses our attention is in its storytelling and structure. We are continuously jerked from one setting to another without enough time for characters or relationships to fully develop. Just as Augustine begins to forge a connection with Iris, we cut to the Aether and now must try to involve ourselves with the motivations of the crew members. The flashbacks add another layer of narrative, giving the film another reason to pivot away before you can get emotionally invested in any story line.

It’s common for a simple plot to become more complex through the unfolding of the background of the characters. The problem here is that there’s just a little bit too much else going on. We have to deal with Augustine’s illness, Iris’s origin, their arduous mission, and the trials and tribulations of the Aether astronauts. Also, we’re often asked to guess how exactly the recent apocalypse took place. It’s ultimately a lot to digest and the story perhaps could have been told better in a mini series or multi movie format or by merely rearranging, trimming or omitting some of the scenes.

2019’s Ad Astra, while suffering from many flaws of its own, largely kept the focus on its protagonist and allowed for us to follow along on his journey. This allowed for better pacing and kept the audience’s attention on whatever was happening on-screen. Throughout The Midnight Sky, we are often left thinking about the prior scene or trying to make sure we are connecting the dots. The plot isn’t complicated, it’s just not told in a way that allows us to embrace any of the characters.

While it offers its own brand of post-apocalyptic vision and celestial spectacle, The Midnight Sky lacks cohesive storytelling and the capacity to emotionally resonate with its viewers.

The Midnight Sky benefits from its high production value and star power, but can't quite connect on any emotional or thought-provoking level.