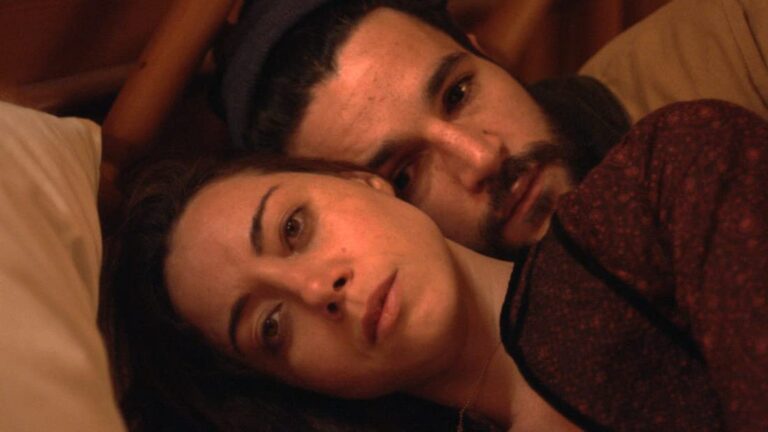 While most consider 2020 to be the penultimate drought of quality cinema due to the COVID-19 pandemic, a few select films generated buzz, conversation and acclaim. Black Bear fits this bill. This experimental drama debuted in December and stars Aubrey Plaza, Christopher Abbott and Sarah Gadon. Black Bear was written and directed by Lawrence Michael Levine.

Taking part in two acts which seem as mutually exclusive as they are deeply intertwined with each other, Black Bear showcases the true talent of Aubrey Plaza. The first half of the film follows Allison (Plaza) as an actress-turned-scriptwriter who rents space in a remote lake house from couple Blair (Gadon) and Gabe (Abbott) with the intent of finding new inspiration. The more that the mysterious Allison interacts with the hosts, the more their relationship seems to come apart at the seams.

Everything gets reset in Black Bear‘s second act. The same parts are all there (well, sort of) but the perspective takes a massive shift. The setting remains the same, a spacious getaway home in the forest, but it is now filled with the cast and crew of a film shoot starring Allison, Blair, and Gabe. We’re now tracking the troubled actress Allison, the star of the production, whose constant inebriation provides moments of both calamity and brilliance for the team involved.

Manipulation, jealousy and anger transcend both parts of Black Bear as the turmoil and ill motivations within each character surface. The film is anchored by an impressive Aubrey Plaza performance. Through Allison, she broadcasts an entire spectrum of emotion, from passion to rage to ambivalence. You almost get the feeling that the screenplay itself was created for Plaza to put on an acting clinic and demonstrate her full range (which would be completely okay if that were the case).

Black Bear offers a unique behind-the-scenes perspective into indie film productions, not leaving out any shades of tumult. We catch a glimpse of the highs and lows of arthouse movie shoots, including crew members getting sick on set. You have to imagine there must have been confusion between actors playing the crew and the crew of Black Bear themselves. But you never really get that vibe while watching the on-screen production unfold. Everything is seamless and you’re left wondering how they accomplished such a feat.

Black Bear will never get around to answering all, or any, of the questions you have about it’s two chapters and how they’re correlated, which is closer to “bizarro Superman” than it is to a Yin and Yang duality. But it will leave its claw marks on you as an exploration into the acting, writing and film making process itself. Its script doesn’t quite delve into dark comedy and its shift in frame of reference doesn’t amount to blatant meta commentary. Black Bear feels fresh and self-contained. A different kind of beast, if you will.

Rather than leave you begging for mercy, Black Bear will make you want to see more of its teeth. Strong performances, namely that of Aubrey Plaza, power an experimental and exploratory format. You’ll be left wondering what would have transpired in a third act.

Black Bear balances its dramatic intensity and intrigue on the shoulders of a strong Aubrey Plaza performance.