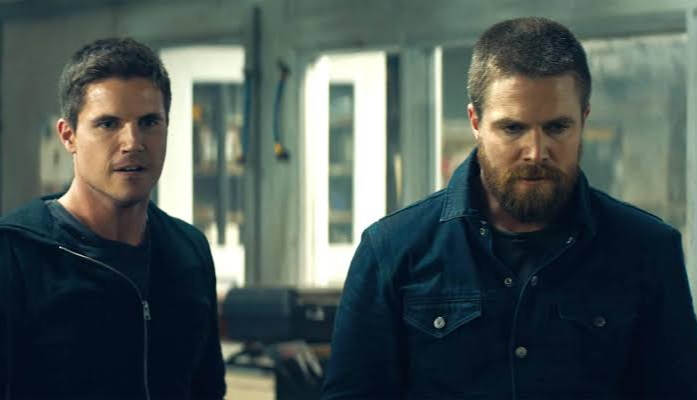 Code 8 is a 2019 Science Fiction film simultaneously released in theaters and on streaming. Robbie and Stephen Amell produced a short film of the same name in 2016 in hopes of garnering crowdfunding for a full length feature film through IndieGoGo. Inspired by what they saw, fans quickly helped the Amells (first cousins) surpass their target of $200,000. Principal photography for Code 8 began in June 2017, and according to Wikipedia, boasted a budget of over $29 million. End credits reveal that a variety of production companies and other groups were involved in financing.

Jeff Chan is credited as both the Director and a Producer, while Robbie and Stephen Amell star as the film’s protagonists (reprising their roles from the short film). Sung Kang, who you know best from the third thru sixth installments of the Fast & Furious franchise also stars.

Code 8 takes place in an alternate present, where 4% of the world’s population is born with superhuman abilities à la the X-Men (you may also be reminded of Looper). These powers are typically hidden until use, though militarized local governments keep records of all those “enabled” and keep an extremely watchful eye. Code 8 does not delve into the full extent of different powers that exist, but throughout the movie we are introduced to “electrics”, “healers”, mind readers, and those who can individually lift thousands of pounds. Meanwhile, an underground marketplace has developed for “Psyke”, an increasingly popular drug derived from the spinal fluid of those enabled.
Connor Reed (Robbie Amell), who possesses high-level “electric” skills, is a blue-collar construction worker struggling to make ends meet. Despite being able to utilize his powers to manipulate electricity on the job site (unbeknownst to the authorities), he is troubled with making enough money to treat his ill mother (who is also power-enabled). Desperate for cash, Connor agrees to do a job for Garrett (Stephen Amell) and falls into the dangerous and hostile “Psyke” trade world.

While Code 8‘s premise doesn’t exactly match that of other science fiction movies and television, it certain feels familiar. Among those that come to mind are the aforementioned X-Men franchise and 2012’s Looper as well as District 9, Bright, Minority Report, Elysium, the Heroes TV series, or perhaps the more recent Captive State. Essentially, the film feels like an amalgamation of sci fi themes including second-class citizenship, feared supernatural ability, and over-militarized police state.

At about 95 minutes and with a limited budget, Code 8 doesn’t quite explore its world as much as you’re curious about. It uses news montages and bits of expositional dialogue to give you as much as you need to know. With that being said, the end result feels incredibly fresh. Sophmoric sci fi clichés and tropes are either not present or not noticeable. There is little fat in terms of excess characters or story lines. You get to know the characters well due to enthusiastic performances throughout (and namely by the Amells). The pacing feels about right. The CGI is impressive.

Though the sub-blockbuster budget does show in the production value at times, Code 8 is a brisk, lean ride that feels honest and heartfelt. Where the filmmakers are coming from and where they wanted to go is all laid out in front of you. It’s ambitious, but does not get ahead of itself. Though plenty of relation can be made between the issues presented in Code 8 and modern society, you don’t feel as though any messages are being crammed down your throat or that the creators are trying to imprint their own version of morality on you.

Ultimately, Code 8 is the kind of effort we’re happy to get behind. Perhaps more importantly, it’s comforting to see fans support a mere snippet of a vision and then be rewarded with seeing a complete picture that lives up to the pitch.

While pedestrian at times, Code 8 mostly feels organic and unpretentious. It's an easy watch with spirited performances from its leads and enjoyable action.