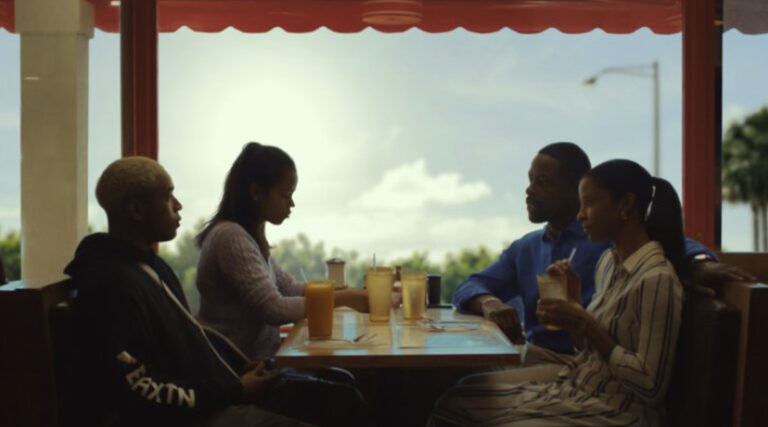 2019 was a particular solid year for film with clear standouts in acting performance and other awards categories. Of course, everyone has their list of snubs – those who didn’t win and/or missed the nomination completely. In our opinion, the year’s biggest awards season snub belongs to Waves. This contemporary drama hit theaters in mid-November, but seemingly fly under the radar of audiences, the press, and the Academy.

Waves, directed by Trey Edward Shultz, tracks the life of the Williams, an upper-middle class family of four living in South Floridian suburbs during a particularly turbulent time for the elder child, Tyler (Kelvin Harrison, Jr.).  Occupied with high school, sports, working in the family business, and a seemingly symbiotic relationship with his girlfriend, Tyler leads a particularly pressurized teenage life. His father, Ronald (Sterling K. Brown), plays the prideful patriarch who accepts nothing but perfection out of Tyler.

Observing this dynamic are Emily (Taylor Russell), Tyler’s caring younger sister, and Catherine (Renée Elise Goldsberry), the nurturing stepmother of the two.  The women of the family recognize the pressure being applied to Tyler, but see is it as the status quo and seldom feel the need to interject.  Things begin to spiral rapidly out of control and downward when a series of unfortunate events plague the most important aspects of Tyler’s life. Injuries lead to the likely end of Tyler’s burgeoning athletic career and his pregnant girlfriend Alexis (Alexa Demie) breaks up with him following a tumultuous argument over what to do with the child (Tyler insists on an abortion).

Keeping this review spoiler-free, the latter half of the movie more closely follows a more free-wheeling Emily as she deals with the aftermath of Tyler’s choices.  Emily meets fellow student Luke (Lucas Hedges), and the two forge a strong connection being able to reconcile with each other over their respective family turmoil.  Meanwhile, Catherine and Ronald struggle to find common ground in deciphering the source of their family’s unraveling.

What makes Waves so powerful is difficult do discern, as the film isn’t lacking in any department. This sets it apart from many 2019 notables. Joker brings to mind Joaquin Phoenix’s unsettling strong performance. Oscar Best Picture winner Parasite was recognized for its nuanced social commentary. 1917 featured breathtaking cinematography.  But Waves does just about everything well.

Both Kelvin Harrison Jr. and Sterling K. Brown give impeccable performances, especially when playing off of each other. Moreover, there’s not a single weak link in the supporting cast. Shultz’s cinematic style uses a variety of camera angles and sweeping techniques. The aspect ratio changes multiple times in order to supplement the mood of each vignette that the movie gives way to. More subtly, the lighting, colors and tinting complement the vibe each scene gives off.  The pop soundtrack showcases hip-hop, rap, electronic, and soul artists where you can tell that songs were carefully curated to enhance the moments.

The themes in Waves are numerous and widely relatable across all demographic subsections. The pressure to be successful, the weight a father can put on a son, and the ramifications of concealing emotions are the core of what Tyler goes through. Additionally, Waves focuses on anger, bitterness, guilt, coping, forgiveness and hope.

There are few scenes in Waves that don’t evoke emotion and they do not immediately come to mind. The film is visceral and authentic from wall to wall. It embraces the eternal familial issues that have transcended time, yet feels fresh and unlike anything else. The title serves as a metaphor to the emotional cycles of life.

The reason Waves hasn’t garnered much hype is likely due to the fact that it simply doesn’t ask for it. There is nothing sensationalized here. Instead, it delivers storytelling grounded in reality and refined performances that don’t scream “look at me.” Combine this with its captivating cinematography and well-timed soundtrack and you have a masterpiece that will hopefully become more appreciated with time. This movie doesn’t tell you its special, it shows you. Waves has only made ripples so far, but the water is warm and we’re hoping others will go for a swim.

8.0 These Waves are Deep

Shultz solidifies his writing and directing prowess with Waves. The film is visceral, heartfelt, and real.