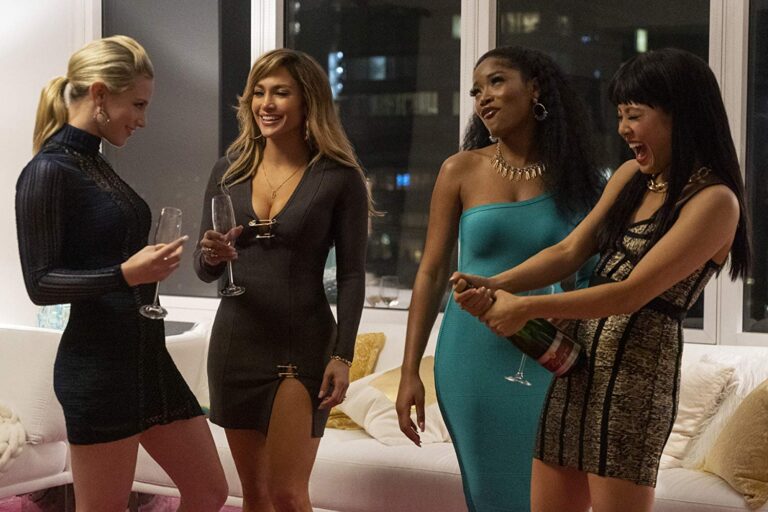 Let me preface this Hustlers review by saying I was unfamiliar with the true story that it’s based on. While I’m completely aware of what triggered the 2008 recession and knowledgeable of it’s ramifications (I was an adult in the workforce when it occurred), I haven’t since heard of the story that Hustlers is based on. I considered this irrelevant for review purposes, or at least in the case of this review. In other words, I’m not rating Hustlers on how closely it aligned with the actual events.

Hustlers follows Destiny (Constance Wu) as she takes up employment at the Moves strip club. While not her first stint as as stripper, Destiny is quickly humbled by Ramona (Jennifer Lopez), a veteran dancer and de facto team captain at Moves. Hustlers tracks the successful collaboration between Destiny and Ramona, which namely involves them stripping for VIP clientele from the financial industry, until the beginning of the 2008 recession. At that point, the two are forced separate ways due to declining business at the club.

A few years later, Destiny rejoins the club and reunites with Ramona. Moves has resorted to offering cheap sexual favors to lower-tier clients performed by “mostly Russian” dancers. Repulsed by this, Destiny and Ramona begin a scheme to once again attract higher profile customers, enlisting their colleagues in the process. Using alcohol, charm, and eventually drugs, they schmooze financial industry professionals found patronizing neighborhood bars into following them back to the strip club. The crew then coaxes their inebriated guests into paying for VIP services. This is where the trouble begins. Hustlers occasionally flashes forward to investigative journalist Elizabeth (Julia Stiles) interviewing Destiny and trying to piece together the story.

Hustlers begins with a great amount of sex appeal and intrigue but doesn’t take long to become boring and tedious. The entertaining dynamics of both the business-client relationship and Destiny-Ramona friendship quickly fizzle out. Throughout the movie, men are largely portrayed as stupid, gullible, greedy and philandering. Don’t get me wrong – plenty of these types exist on Wall Street and throughout the financial industry. But the movie goes above and beyond to tell you that man=pig. One Moves patron, Stephen (Devin Ratray), appears to be empathetic and caring for a brief period, but is quickly dropped and never heard from again.

The film seems to make an attempt to portray Destiny and Ramona as heroes with flaws. Or perhaps it’s making them to be moms-struggling-to-get-by with flaws. In either regard, it’s largely a failure. Jennifer Lopez and Constance Wu deliver competent performances and are charismatic throughout, but their characters are hardly likable. It’s difficult to tell whether Hustlers is trying to be a black comedy, comedy-drama, or drama by itself. The movie is chalked with cameos (Cardi B, Usher, Lizzo) who offer little in the way of comedy or substance.

The film has energy and is shot well, but in the end, you don’t really feel as though the protagonists live up to the titular profession. There’s no clever con or elaborate heist, just desperate women taking advantage of men only slightly more guilty than them (and arguably not even). Ultimately, Hustlers fails to pick a path and becomes a shallow and repetitive generalization about punishing Wall Street excess.