The Critics Speak! It’s been nearly two weeks since Star Wars: The Rise of Skywalker was released for general audiences and if you’re like us, you feel that you’ve had ample time to digest everything that was thrown at you in the film’s 144 minute run time.

There’s no doubt the final phase of the “Skywalker Saga” (albeit likely not the final episodic film) covers a lot of ground at arguably (easily argued) the fastest pace in the Star Wars film universe.  We’re sure you’ve either read reviews, watched YouTube critiques, or have talked about it with friends.

For what it’s worth, we’re here to provide our take of which elements, ideas, and plot points we liked and what we didn’t like from Star Wars: The Rise of Skywalker in convenient list form…

Palpatine is alive
Admittedly, when this was revealed in trailers, it seemed like a good idea. What better villain is there than the one responsible for the galaxy’s strife since Episode 3 (and pulling strings since Episode 1)? In actuality, Palpatine, aka Darth Sidious, being present felt like a disservice to Anakin’s sacrifice in Return of the Jedi.

Lightspeed Skipping is a thing
We thought the “Holdo Maneuver” from The Last Jedi was a bit of a stretch in terms of what is possible in the Star Wars universe. We’re not sure why “Lightspeed Skipping” needed to be introduced or why the TIE Fighter pilots can also do it, but it seems unnecessary and more aligned with physics in the Guardians of the Galaxy world.

Rey training
This is somethings fans have been wanting to see since Episode 7. In The Last Jedi, we get an abbreviated version of Rey learning the ways of the Force, but it was largely unsatisfying. In The Rise of Skywalker, we’re happy to see Rey putting more work in, though it still doesn’t justify the control she has over her power.

Palpatine’s fleet, Snoke, Exegol, Sith lair, etc.
It’s unclear what this whole place even is… how was the fleet manufactured? Who pilots the ships? Why did Palpatine wait until now? What was the point of Snoke? There are far too many questions that arise in the first 30 minutes of the movie and we’re expected to keep them to ourselves. This isn’t nitpicking. This is the entire backbone of Rise and much of the trilogy rests on these contrivances.

Rose Tico is sidelined
We weren’t big fans of Rose Tico in The Last Jedi, but we were hoping J.J. Abrams would make her redeemable or at least likable. Rose saving her friends from doom in a kamikaze maneuver would have been the perfect sendoff. Imagine her piloting a Y-Wing and looking at a picture of her sister taped to her console. Feeling inspired by her sibling’s sacrifice, Rose deciding to give her own life for the Resistance with just seconds to spare would have made for a great payoff moment.

Lando
This was a tough one. Are we just happy to see Billy Dee Williams back in the Star Wars world? Or does the reemergence of his character actually add value to the film? We ultimately came to the conclusion that while Lando Calrissian’s presence seems fan-service-y, he adds some fun and freshness to this episode.

Zorii Bliss
In our opinion, Keri Russell’s Zorii Bliss is one of the most throwaway characters in the new trilogy. She is a cookie-cut iteration of two tropes: “I’m a character from your past here to remind you of your past” and “I appear to die only to somehow comeback at the end of the movie to help.” There are versions of this character that could work, say if Rise of Skywalker‘s storyline was spread out over several movies or perhaps in a Poe Dameron spinoff. Unfortunately, there’s little substance here and the audience is left apathetic to both her apparent death and later heroism.

Babu Frik
A fun character who provides comic relief but also feels important to the plot and isn’t merely shoehorned in.

Rey’s New Powers
We’re mixed on this one. Rey’s newfound healing powers feel particularly unearned, especially since we’ve never seen any of the most powerful Jedi have them. On the other hand, her accidental lightning bolts on the planet Pasaana made for one of the coolest scenes in the movie, not just for how it looked but because of its sinister implications.

Chewie’s Death
Even if the audience wanted to believe that Chewbacca was gone (more of a Rian Johnson move anyway), and at the hands of Rey, they aren’t given much of a chance to. Chewie is back on screen before you have time to shed a tear because apparently there were two transports.

Rey is a Palpatine
Pre-The Last Jedi, we considered the possibilities of Rey’s lineage including her being a Skywalker, Kenobi, or Palpatine. The latter seemed the least discussed, at least in casual fan groups, yet makes the most sense when looking at her natural power. Rey being the granddaughter of Emperor Palpatine works to fill that which is the biggest question (or plot hole) of the trilogy – her uncanny force abilities. At this point, however, the explanation feels clunky. While at first we wondered why Rey was inexplicably powerful, now we wonder why her parents were inexplicably un-powerful.

Jannah
Naomi Ackie delivers a strong performance as Jannah, but the character feels like an unnecessary add-on. She and Finn share much of the same background and connect well. However, by the end of the film, their relationship feels like another untied thread (Rey, Rose). Her introduction to Lando seems to teeter an awkward line between possible daughter or potential love interest. Star Wars: The Rise of Skywalker The Visual Dictionary confirms that Lando is indeed her father. 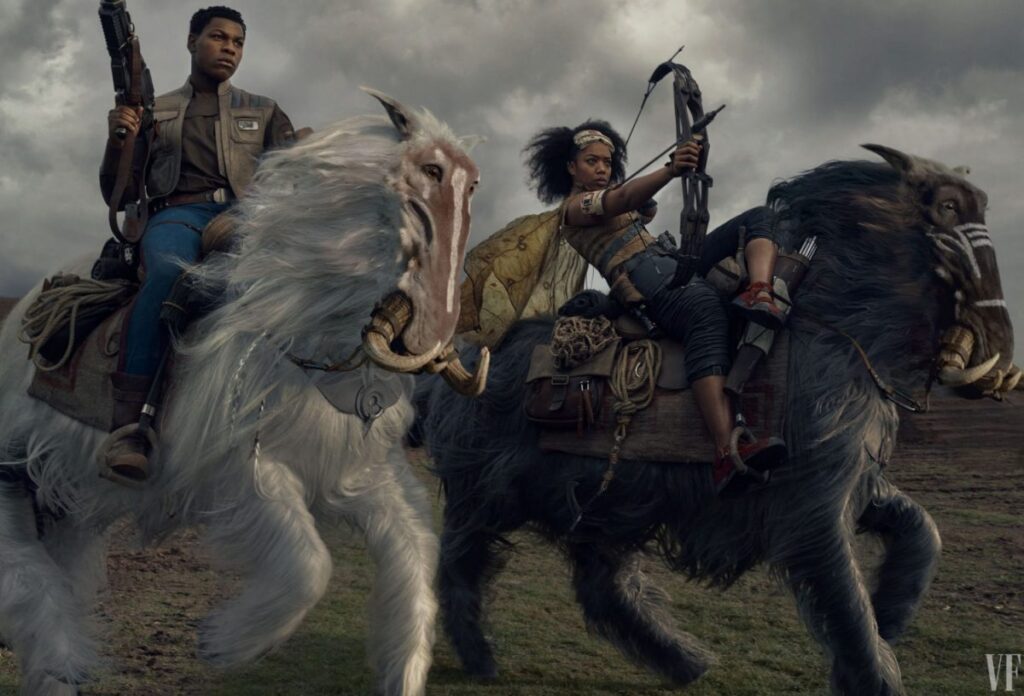 Han Solo appearance & Kylo Ren’s conversion
Kylo Ren cycling back into the good-hearted Ben may have been the most predictable turn of events in this trilogy but it was a pleasant and refreshing surprise to see Harrison Ford make an encore appearance in the franchise.

Handling of Princess/General Leia amid Carrie Fisher’s death
We see far more of Carrie Fisher in The Rise of Skywalker than anyone would have thought or what was let on in the trailer. Most of the scenes are seamless from a technical standpoint, at least to the casual viewer, and handled with grace.

Fleet of friends arrive
This wasn’t anywhere nearly as meaningful of a payoff scene as the “Avengers Assemble” moment from Endgame, nor could it have been. Marvel had 20+ movies to build up their vast network of heroes. Here, we get Zorri Bliss and Babu Frik joining the fight, but we were only introduced to them earlier in the movie. The short clip of Wedge Antilles may have been the most satisfying from this sequence.

Deceased Jedi voices
This is the payoff that fans were looking for. However, we side with the large faction that would’ve preferred actually seeing visual representations of Mace Windu, Yoda, Qui-Gon Jinn, et al.

The ReyLo Kiss
Just as unnecessary and meaningless as Rose and Finn’s kiss in The Last Jedi, the mouth-to-mouth between Rey and Ben felt far out of place. The dude is after all, still responsible for the greatest mass genocide the galaxy has ever known. This scene should be about forgiveness, not fulfilling the wishes of an online fan group or having Rey meet a requisite for becoming a new Disney princess.

Rey returns to Tatooine
Seeing Luke’s abanded and sand-covered home on Tatooine combined with John Williams’ score (Track 18, “A New Home”) is both chilling and heartening. We thought this was an apt tribute that didn’t feel shoehorned in.

When it comes to this, the final installment of the “Skywalker Saga,” there is both a lot to like and a lot to loath. More truly, there is just a lot. The Rise of Skywalker had charismatic actors, great cinematography, and a captivating score. Weaknesses manifested in plot, dialogue, and payoff. The film’s biggest flaw may be its lack of subtlety. Like most of the episodes before it,Rise doesn’t fail to at least leave you entertained.

The Rise of Skywalker, much like The Last Jedi, has generated a whole spectrum of fans, detractors, and those with mixed feelings. We fall into the final category on this one.